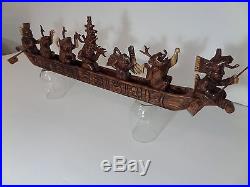 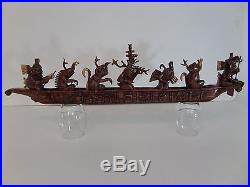 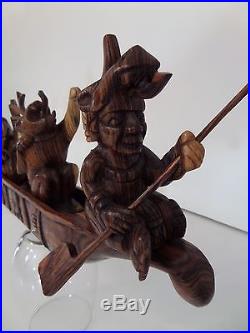 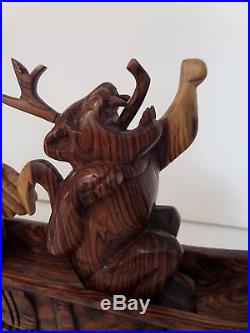 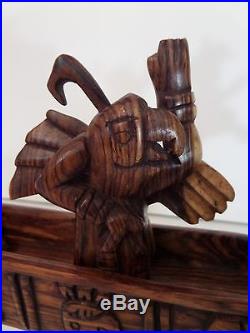 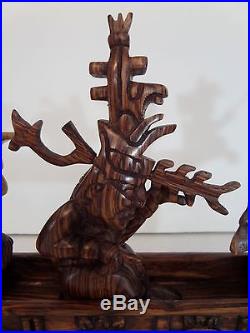 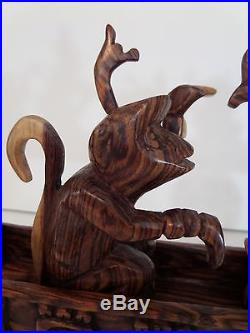 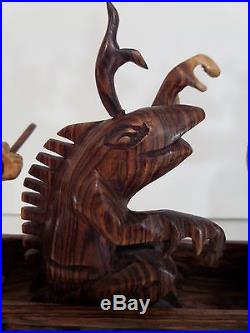 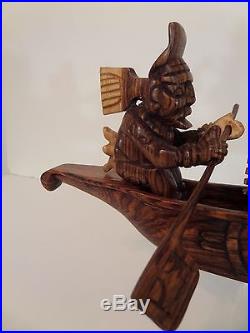 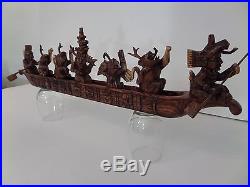 I Guarantee the art work’s Authenticity. The government of Guatemala gives the local Indians permits to cut down certain trees to be able to make these sculptures, the Indians only use the hard wood from the center core of the trees, each sculpture is hand carved in solid wood by each artist and no two are exactly alike, the Paddler Gods had a lot of significance and spiritual believe to the Mayan culture, for each God on the canoe had a meaning or purpose for their well being during the seasons and through out the calendar year. This sculpture is a hand carved in solid wood and is a replica of the art work found inside the Mayan ruins of Tikal. Wood Canoe – 32″ x 2″ inches. The Seven Mayan Gods. Jaguar – 5″ x 3″ inches. Kankin – 4″ x 3″ inches. Perico – 4″ x 4″ inches. Maiz – 7″ x 5″ inches. Mono – 5″ x 4″ inches. Iguana – 5″ x 3 ” inches. Mantarraya/Stingray – 6″ x 3″ inches. Posted by: Occult World in Mayan Gods April 14, 2014. From: Handbook to Life in the Ancient Maya World. An important pair of deities is the Paddler Gods, so called because they are depicted in some imagery as paddlers in a canoe. One such image is incised on a bone found in Burial 116 at Tikal in the Petén. This image depicts a scene in which the Paddlers transport the maize god in their canoe through the waters of the Underworld. Since some Mayanists have argued that the canoe also served as a visual metaphor for the Milky Way, the Paddler Gods can be understood as journeying across the celestial world until they arrive at the constellation that Westerners call Orion, where creation took place. The Paddlers are depicted at opposite sides of the canoe. The two gods have been designated by modern scholars as the Old Jaguar Paddler at the front of the boat and the Old Stingray Paddler at the stern. Embodying oppositions, the Paddler Gods represent night and day. The hieroglyphic sign for akbal, or darkness, is associated with the Old Jaguar Paddler, while the hieroglyphic sign for kin, or day, is associated with the Old Stingray Paddler. In some versions of the creation story, the Paddler Gods participate in establishing the Cosmic Hearth by setting the first of the three hearth stonesthe Jaguar Throne Stonein place at a location called Na-Ho-Chan, or First-Five-Sky. The Old Jaguar Paddler, who shares characteristics with jaguar deities, wears a headdress that is in the shape of a jaguar head covered with black spots. Like other aged deities, he has no teeth. The Paddlers are often represented in association with serpent imagery. Serpents were used in Maya images as embodiments of the visions by which the Maya manifested their ancestors and deities during ritual bloodletting. In some scenes depicting bloodletting rituals, miniature representations of the Paddlers appear within mystical clouds inside the opposite ends of the open jaws of serpents. Other images incorporate miniature representations of the Paddlers emerging from the serpent-headed ends of a ceremonial bar. The association between the Paddlers and bloodletting rituals is underscored by the stingray spines and bones worn in the nasal septum of the Old Stingray Paddler. The same implements were frequently used in sacred rites in which rulers offered their blood to the gods. The History of Tikal. Tikal (tee-KAL) is a ruined Maya city located in the northern Petén province of Guatemala. During the heyday of the Maya Empire, Tikal was a very important and influential city, controlling vast stretches of territory and dominating smaller city-states. Like the rest of the great Maya cities, Tikal fell into decline around 900 A. Or so and was eventually abandoned. It is currently an important archaeological and tourism site. Archaeological records near Tikal go back to about 1000 B. And by 300 B. Or so it was already a thriving city. By the Maya early Classic era roughly 300 A. It was an important urban center, thriving as other nearby cities declined. The Tikal royal lineage traced their roots to Yax Ehb’ Xook, a powerful early ruler who lived sometime during the Preclassic period. The item “Mayan Paddler Gods Wood Sculpture Canoe Replica Hand Carved by Tikal Indians” is in sale since Friday, June 23, 2017. This item is in the category “Art\Art Sculptures”. The seller is “lagaleriacubanfineart” and is located in Miami, Florida. This item can be shipped to United States.