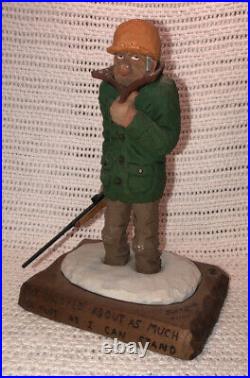 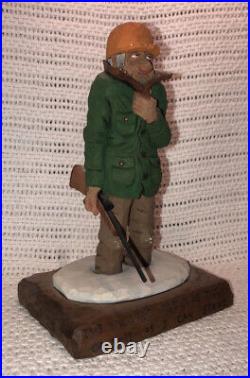 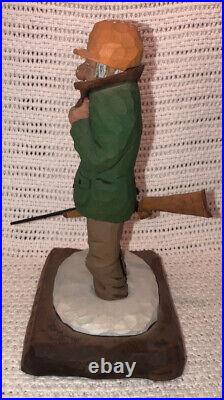 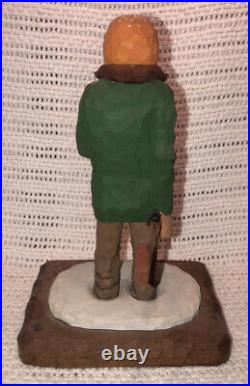 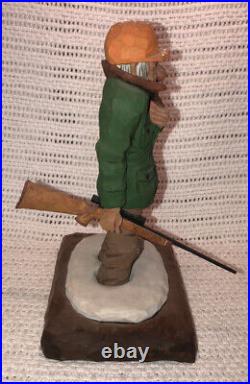 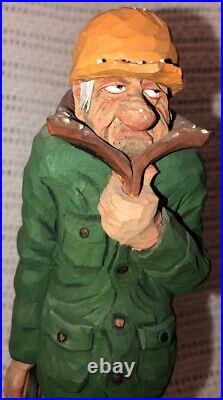 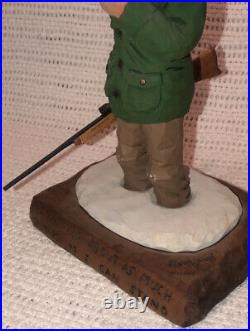 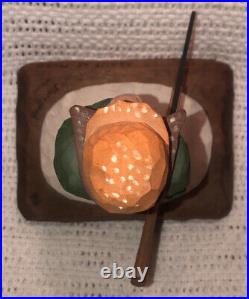 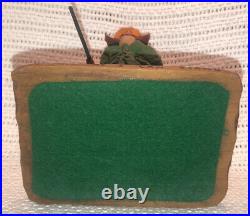 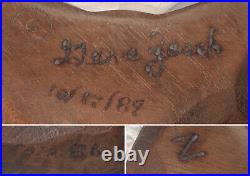 Wonderful and Rare Original Gene Zesch American, Texas B. 1932 “I’ve Enjoyed About As Much Of This As I Can Stand” Painted Wood Carving Sculpture Signed and Dated! This is a completely authentic and original sculpture by the famous Western American Sculptor Gene Zesch depicting an Old Man With a Rifle Bundled Up for the Cold and Standing in a Couple Inches of Snow. The piece is titled “I’ve Enjoyed About As Much Of This As I Can Stand”. Gene Zesch grew up on a Texas ranch and his works are generally caricature figurines of cowboys and cattlemen. His works are often self-deprecating comical scenes of cowboys and westerners. The irony and humor of this piece is that it is of a’Texan’ Cowboy who is fed up with the weather because of just a light snowfall totaling only a couple of inches. As we all know – cowboys hate snow! That’s why they don’t live up North. Gene Zesch gained national recognition in the 1960s when prominent figures such as Lyndon B. Johnson and John Connally started collecting his woodcarvings. He also hand paints bronze castings of his more notable carvings and sells signed prints of photos of his work. This an original wood carving! Can’t cast the bronzes without this original! The sculpture is in perfect original condition with no damage – please see photos. This piece has truly been taken care of. The gun is very thin and fragile – especially the barrel. Sculpture is titled on front of base “I’ve Enjoyed About As Much Of This As I Can Stand”. Sculpture is signed in the back right corner “Z”. Sculpture is marked on the right side of base COPR. Measures 8 1/2″ tall x 6″ wide x 6 1/2 deep including the gun. Will be professionally and carefully packaged. Some more interesting info! Zesch’s works can be found in countless museums and notable collections around the world and have been featured in one-man shows. National Cowboy & Western Heritage Museum (7 works). LBJ Library & Museum, Austin (8 works). Eddie Basha Museum, Tempe AZ (13 works). National Ranching Heritage center, Lubbock TX (12 works). A&M University MSC Forsyth Center Galleries (10 works). Favell Museum, Oregon (8 works). Pearce Museum, Corsicanna TX (8 works). Booth Western Art Museum, Cartersville GA (7 works). Leanin’ Tree Museum, Colorado (1 work). One-man Show, National Cowboy & Western Heritage Museum (one of the best attended in their 50-yr history). One-man Show, Institute of Texan Cultures (best attended). One-man Show, A&M University MSC Forsyth Center Galleries. Smithsonian Instutition – Hall of Presidents. Texas Governor John Connally. Lynda Bird Johnson Robb. Roscoe Fawcett, Fawcett Publishing Co. Long, President, US Steel. Richard Rogers, Mary Kay Cosmetics. Fred Gipson, Author of Old Yeller. Jodie Thompson, 7-11 Corp. Randy Owens, “Alabama” lead singer. President of American Airlines. This item is in the category “Art\Art Sculptures”. The seller is “jb-antiques-and-collectibles” and is located in this country: US. This item can be shipped to United States, Canada.