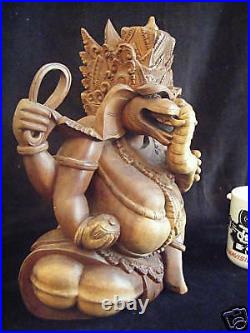 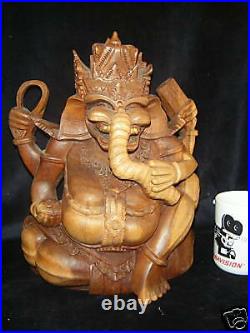 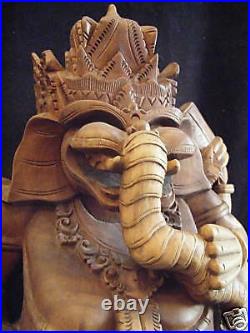 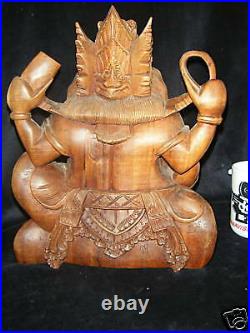 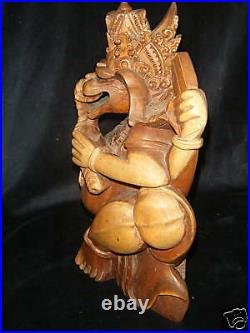 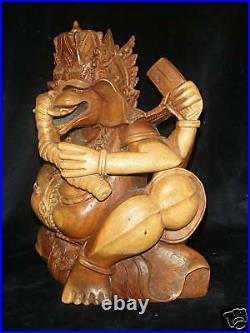 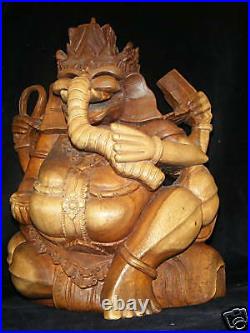 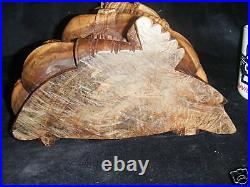 Quintessential Balinese solid wood carving of Ganesh. This is a contemporary Balinese carving of Ganesha with four arms. It is hand carved by talented Gianyar artisans from a wood locally known as suar it is a. Rain tree or scientifically known as Samanea Saman. Also known as “Suwar” or “Suar” in Indonesia, Rain tree is a very hard wood that comes in a delicately natural brown color. It also has a straight grain and rather coarse texture which makes it easy to carve. Its huge trunks found in mature trees make it a likely candidate for creating large wood carvings. Its crisscrossed interlocking grain eliminates cracking due to dryer environments. In addition, rain tree can be finished to a fairly high gloss to further bring out its beautiful natural brown appearance. This carving has been polished down to show a chocolate brown tone. The muscle tone is highly defined and typical of the Balinese contemporary style post 1941. It is unique in that it is a devotional statue executed with the contemporary styling, the reliance on the natural grain and color of the wood to emphasis the design. It is a flawless carving from one solid piece of Suar and true to the quality of the hardwood it is perfect. There are no checks, cracks or defects. This excellent statue measures a tad over 12″ inches high it is about 10″ inches wide and is about 5 inches deep. This has been in my personal collection for over twelve years. And I believe it dates from the early 70’s. I think it is one of the finest Balinese carvings I have ever seen due to its composition and execution. See the many photos for the condition of this stunning Balinese solid hardwood carving. And also known as. Is one of the best-known and most worshipped deities. His image is found throughout India. Hindu sects worship him regardless of other affiliations. Devotion to Ganesha is widely diffused and extends to Jains, Buddhists, and beyond India. Although he is known by many other attributes, Ganesha’s elephant head makes him easy to identify. Ganesha is widely revered as the Remover of Obstacles. And more generally as Lord of Beginnings and Lord of Obstacles. Patron of arts and sciences, and the deva. Of intellect and wisdom. He is honoured at the start of rituals and ceremonies and invoked as Patron of Letters during writing sessions. Several texts relate mythological anecdotes. Associated with his birth and exploits and explain his distinct iconography. The Lord of Success. The son of Shiva and Parvati, Ganesha has an elephantine countenance with a curved trunk and big ears, and a huge pot-bellied body of a human being. He is the Lord of success and destroyer of evils and obstacles. He is also worshipped as the god of education, knowledge, wisdom and wealth. In fact, Ganesha is one of the five prime Hindu deities (Brahma, Vishnu, Shiva and Durga being the other four) whose idolatry is glorified as the. Significance of the Ganesha Form. Ganesha’s head symbolizes the. Or the soul, which is the ultimate supreme reality of human existence, and his human body signifies. Or the earthly existence of human beings. The elephant head denotes wisdom and its trunk represents. The sound symbol of cosmic reality. His fan-like ears convey that he is all ears to our petition. In his upper right hand Ganesha holds a goad, which helps him propel mankind forward on the eternal path and remove obstacles from the way. This goad seems to represent his writings of the. Because it has symbols that represent text and appears as a tablet. The noose in Ganesha’s left hand is a gentle implement to capture all difficulties it has also been shown as a rosary which suggests that the pursuit of knowledge should be continuous. A little twist on the typical configuration has one hand on the trunk and the other hand with the. (sweet) which represents that one must discover the sweetness of the. If you have a special request we will do our best to adjust the schedule to accommodate your request. Multiple items will be packaged in a single box only when possible without potential damage to an object. International buyers can use. It is my intention to be as clear and accurate as possible. In the event I make an error, I will always do my best to remedy the situation. Please feel free to contact me with any questions. This item is in the category “Art\Art Sculptures”. The seller is “toronita1″ and is located in this country: US. This item can be shipped worldwide.