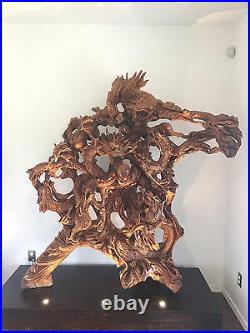 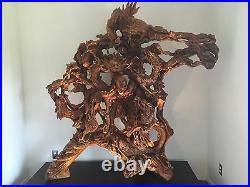 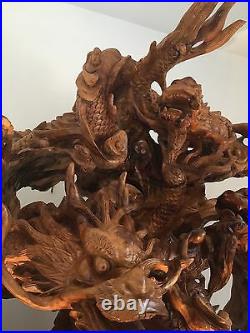 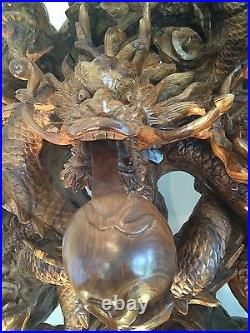 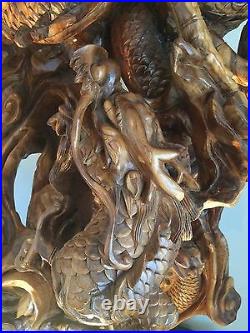 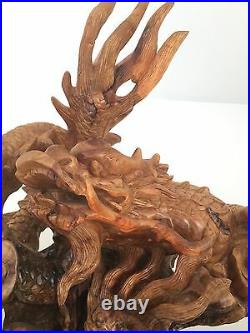 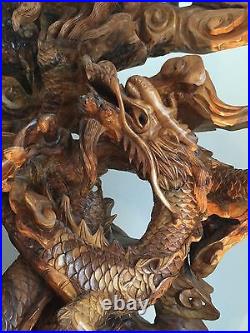 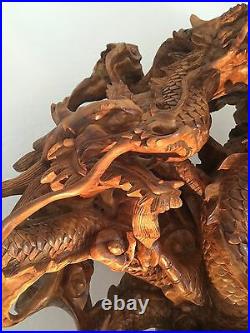 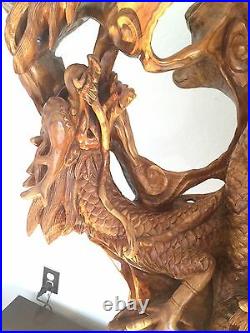 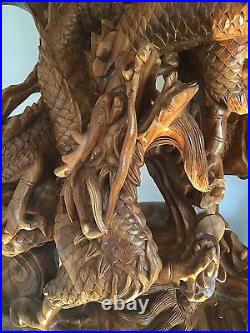 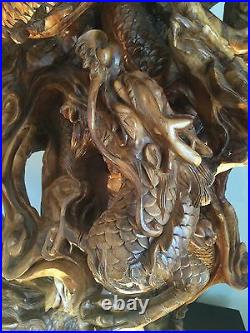 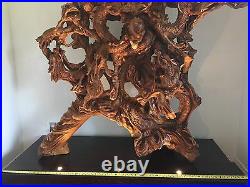 Nine Dragons Playing Pearl. Dragon (Long in Chinese pinyin) is the totem of the Chinese nation. It is composed of body parts of animals, such as deer horn, camel head, snake body, fish scales, talons of falcon, ears of bull, etc. Represents the fusion of different ethnics living in ancient China. The dragon always has ever-changing forms of presence, while each form has its unique name and meaning: Fei Long (flying dragon) flies in the sky, Pan Long (dragon on the earth) lies over the mountains, Qian Long (diving dragon) dives into water, Jiao Long (leaping dragon) springs out of water. A flying dragon is always accompanied with auspicious clouds, and a leaping dragon raises waves. The genuine dragon spits out pearl, with its variations playing around. Sometimes it presents its forms, while some other times, it hides its traces. Dragon has tens of thousands variations and exists everywhere in the world. With these unique characteristics, dragon has gradually evolved to a symbol of imperial power: the emperor would name himself as Son of Heaven and Genuine Dragon, his chair would be called Dragons Chair, and his palaces Dragons Palaces. The dragon represents here power and dignity and wealth. Nine is a simple natural number. However, it means the extreme of numbers and infinite according to Chinese philosophy. Nine Dragons thus have the meaning of extremely high power and infinite dignity and wealth. At the same time, this wooden sculpture Nine Dragons Playing Pearl has implication to the five fundamental elements of universe in ancient Chinese philosophy, which are: gold (means herein metal), wood, water, fire and earth. The Chinese ancestors believed that the world consisted of these five elements. The pearl in the mouth of dragon was made of gold and refined by fire. This can be recognized by the flame on the dragon pearl. A Pan Dragon (Dragon on the earth) lies over the mountain which implies earth. Jiao Long (leaping dragon) springs out of water. Finally, the whole artistic work is sculptured on roots of a tree. Gold, wood, water, fire and earth are harmonically fused into this great work of art. In the long history of China, a lot of great handicrafts are often made by superb skilled masters among the folk. Their philosophy of life was to achieve the highest standard in their art works, while showing few interests on fame or profit. A number of master pieces are left from generation to generation, without people knowing the name of the masters. This wooden Nine Dragons Playing Pearl was sculptured by an old master living in Fujian, China in the 1970s. When he was looking for raw materials in forest, the master found a piece of remnant branch of a camphor tree with unique shape, and immediately he had a great idea of a master piece in his mind. He spent all his reserves and bought the wood back. It took him several months before he started the creation work which lasted for two years. All of his energy was exhausted in order to complete this handicraft, and before long he died with a wooden sculpture master work left to the world. This great work of art was collected by a wooden sculpture fan at first, and then transferred to different collectors for several times before it came to the US. The item “Nine Dragons Playing Pearl Wood Carving, Only One” is in sale since Wednesday, April 6, 2016. This item is in the category “Art\Other Art”. The seller is “wrarnol” and is located in Eagle Point, Oregon. This item can be shipped to United States.