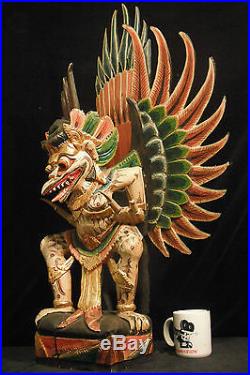 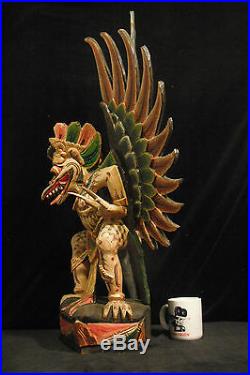 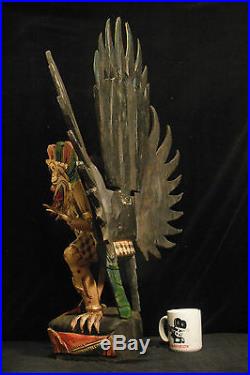 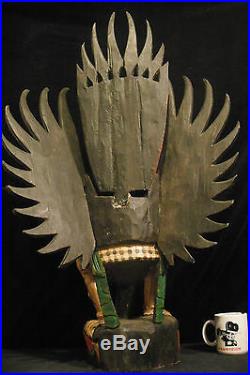 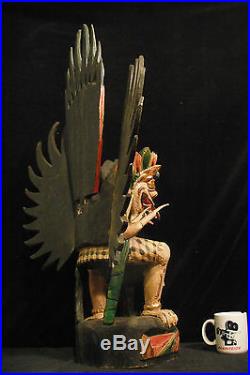 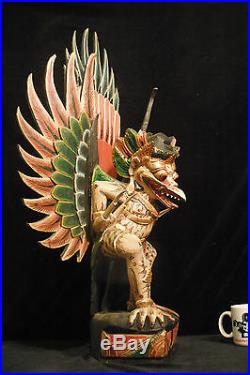 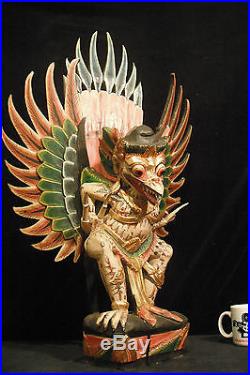 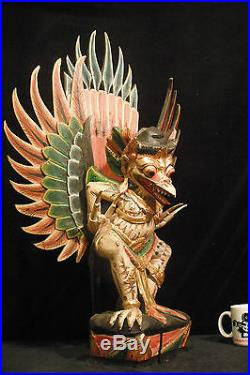 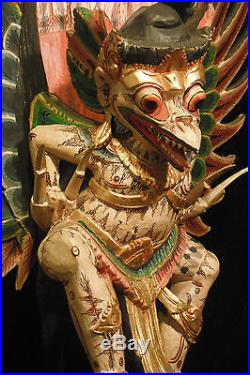 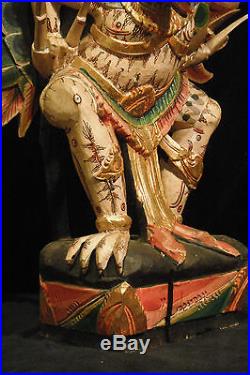 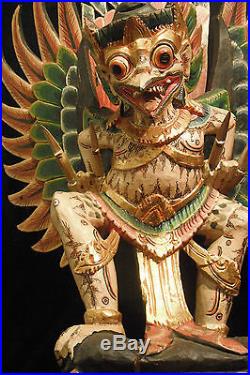 Huge 34 (86.4 cm) Traditional Balinese Wood Carving Garuda. (Height: 34 inches 86.4 cm). (Width: 22 inches 55.9 cm). (Depth: 11 inches 27.9 cm). (Base Width 8 inches 20.3 cm x Depth 9 22.9 cm). Here is a huge Balinese carving of Garuda, it in an older carving that is a great example of. This massive Garuda is meant to be placed high so he can look down at the devotee, and stand guard against evil demons. That is why these deities are often placed in the rafters of temples to provide the divine protection against evil forces. This carving is well executed having a lot of the detail and painting that you would expect from a piece this old. The patina is perfect, the gold leaf burnishes up nicely. The color palette would place it around early 1950s. This is such a fine Garuda he is excellent near perfect condition. He has his wings and tail and all his fingers intact. Some may show some signs of repair but you would have to study each one to see. All the facial features are pristine, no breakage at all down to his fully rendered teeth. There is a crack at the base which is just typical of these large solid wood carvings. The base is also carved in some detail which is unusual as though it were an entablature. This is a first class manifestation of a traditional Balinese Garuda, he is big and bold and hard to find due to his age and apperance. Please see all the photos for the composition and condition of this Balinese artifact. This is from our Balinese collection of wood carvings that we have acquired over the years. We have culled through hundreds to find the best examples of Balinese art. If you have a special request we will do our best to adjust the schedule to accommodate your schedule. Multiple items will be packaged in a single box only when possible without potential damage to an object. It is my intention to be as clear and accurate as possible. In the event I make an error, I will always do my best to remedy the situation. Please feel free to contact me with any questions. Ref: Bali Carving, Balinese, Hardwood, Hand carved mahogany, Shiva, Garuda, Ramayama, Barong, Hindu, base relief carving. Garuda plays an important role in Krishna Avatar in which. And Satyabhama ride on Garuda to kill Narakasura. On another occasion, Lord Hari rides on Garuda to save the devotee Elephant Gajendra. It is also said that Garuda’s wings when flying will chant the Vedas. The story of Garuda’s birth and deeds is told in the first book of the great epic Mahabharata. According to the epic, when Garuda first burst forth from his egg, he appeared as a raging inferno equal to the cosmic conflagration that consumes the world at the end of every age. Frightened, the gods begged him for mercy. Garuda, hearing their plea, reduced himself in size and energy. Throughout the Mahabharata, Garuda is invoked as a symbol of impetuous violent force, of speed, and of martial prowess. Powerful warriors advancing rapidly on doomed foes are likened to Garuda swooping down on a serpent. Defeated warriors are like snakes beaten down by Garuda. Uses a military formation named after Garuda. Even carries the image of Garuda on his banner. The elite bodyguards of the medieval Hoysala. Were called Garudas, because they served the king in the way that Garuda served Vishnu. Garuda is the Hindu name for the constellation. Balinese Hinduism is deeply interwoven with art and ritual and is concerned with a myriad of local and ancestral spirits. Balinese Hinduism is a heterogeneous amalgam in which gods and demigods are worshipped together with Buddhist heroes, the spirits of ancestors, indigenous agricultural deities and also with places considered sacred. Religion as it is practiced in. Is a composite belief system that embraces not only theology, philosophy, and mythology, but ancestor worship, animism and magic. It pervades nearly every aspect of traditional life. The item “Huge 34 (86.4 cm) Traditional Balinese Wood Carving Garuda” is in sale since Thursday, July 25, 2013. This item is in the category “Collectibles\Religion & Spirituality\Hinduism\Statues & Figures”. The seller is “toronita1″ and is located in Port Orange, Florida. This item can be shipped worldwide.