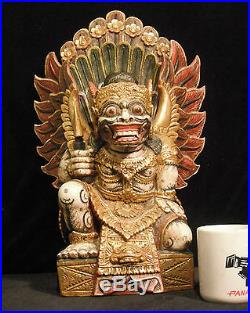 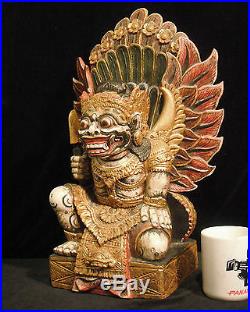 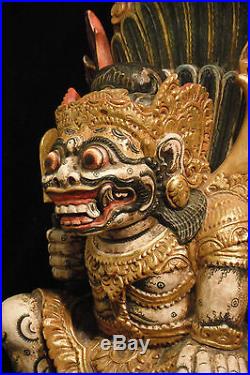 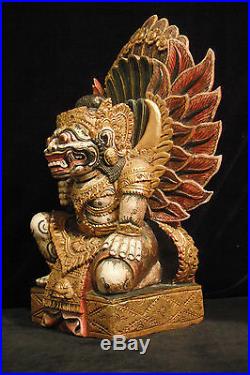 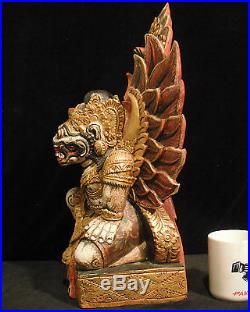 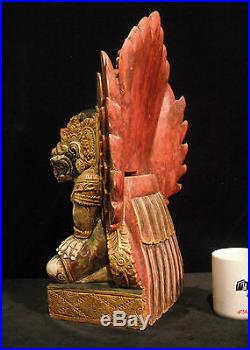 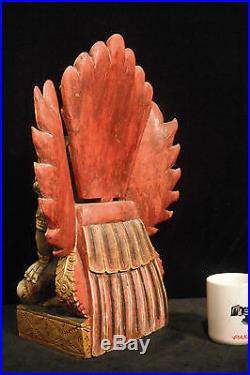 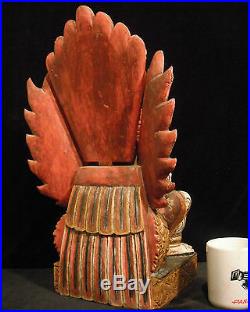 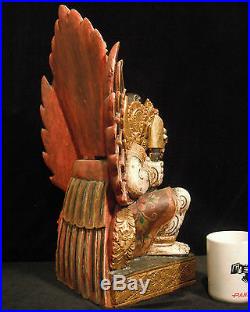 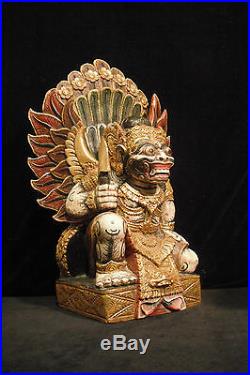 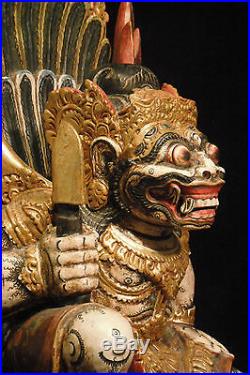 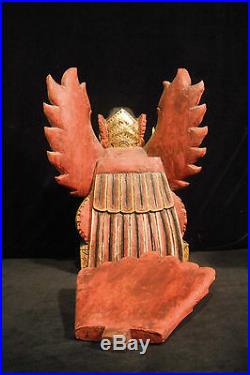 Super Rare Large Wood Carving of Ravana from the Ramayana 19 Tall (48 cm) Antique Traditional Balinese. Century Bali Temple Art. (Height: 19 inches 4890 cm). 13 inches 33 cm. 9 inches 23 cm. (Base Width 8 inches 20 cm x Depth 7 18 cm). He has been carved in the traditional Balinese style he carries a weapon -a knife that is obviously finished in gold leaf as are all the gold parts of this fierce rendition of Ravana who was the king of Lanka. Ravana was said to have 10 heads, but Lankans feel that this represented the 10 kingdoms that he ruled. Ravana is very much a historical figure and historians generally credit him as the ruler of Lanka with his headquarters at Polonnaruwa which is located in North Central Sri Lanka. In Indian folklore he abducted Sita the wife of Lord Rama and took her to Lanka. Ravana took Sita to Lanka and planned to make her the queen of his kingdom. Sita told him she didn’t want wealth or power; she just wanted her freedom. Rama then mounted an invasion army that crossed to. In an epic battle Ravana was defeated and killed and the Lord Rama brought Sita back. This is quite a regal carving of the fierce King Ravana, the base is decorated with gold as a throne, his garments are gold and he is wearing a gold crown. This carving is in excellent condition No flaws at all and has all the wear consistent with its age. The remaining gold leaf burnishes up very nicely and the artistry of his painting is an example of top notch mid century. Not sure of his exact age but has all the attributes of at least 50 years -it is a solid hardwood weighing in over 6 lbs. Please see all the photos for the composition and condition of this one of a kind Bali hardwood carving. This is from our extensive Balinese collection of wood carvings that we have acquired over the years. We have culled through hundreds to find the best examples of Balinese Art. If you have a special request we will do our best to adjust the schedule to accommodate your schedule. Multiple items will be packaged in a single box only when possible without potential damage to an object. It is my intention to be as clear and accurate as possible. In the event I make an error, I will always do my best to remedy the situation. Please feel free to contact me with any questions. Bali Carving, Balinese, Hardwood, Hand carved mahogany, Shiva, Garuda, Ramayama, Barong, Hindu, base relief carving, India, Indian Art, Temple art. There has been a revival of sorts in Lanka and it is pointed out that Ravana had made great advances and also invented the pushpaka vimana or the airplane. In addition he is held in high regard as a physician. 7 medical books are credited to Ravana which were originally written in Sinhala and later translated to Sanskrit. Ravana’s medical books are NadiPariksha, Arka Prakashata, Uddisa Chiktsaya, Oddiya Chikitsa, Kumara Tantraya and Vatina Prakaranaya. Hindu texts of that period also credit Ravana as a man who ruled the 3 worlds and was a follower of Shiva, the creator and destroyer. He is reported to have been administered the juice of immortality by Shiva. He had also mastered the Vedas and all the religious books of the Hindus. Indian texts in particular the Ramayana tells that Ravana, the demon king of Lanka, fell in love with Sita even before they met; After Surpanakha described her in detail he couldn’t get her out of his head. To Dandaka forest he sent his uncle Mareecha disguised as a beautiful deer, So Rama would go fetch it for Sita and that way the area would be clear. Ravana disguised himself as a hermit and went to Sita’s hut begging for food. But she did not realize he was the demon king Ravana who was up to no good. He picked up the ground where she was standing to carry out Sita’s abduction; He knew that if he touched her against her will it would bring his destruction. Others speculate that he might also be exacting revenge for his sister Supernlakha, whose nose had been chopped off by the brother of Rama, Laxman. When Ravana took Sita to Lanka he kept her with him in a separate palace in. He visited her everyday and lavished gifts and presents on Sita. The Ramayana mentions that during this entire period of captivity of Sita, she remained chaste. Hindu texts also agree that Ravana was a virile king, who was fond of women, his favorite wife being Mandodri. Which is why the chastity of Sita during her captivity was mistakenly questioned, for her only love was Lord Rama. The item “Super Rare Large Wood Carving of Ravana from the Ramayana 19 Tall (48 cm) Nice” is in sale since Sunday, August 25, 2013. This item is in the category “Antiques\Asian Antiques\Southeast Asia\Statues”. The seller is “toronita1″ and is located in Port Orange, Florida. This item can be shipped worldwide.