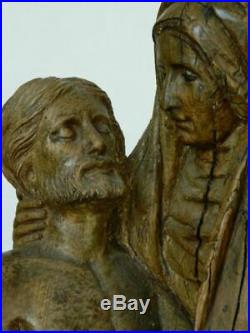 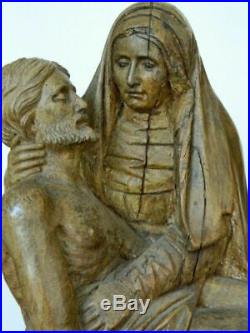 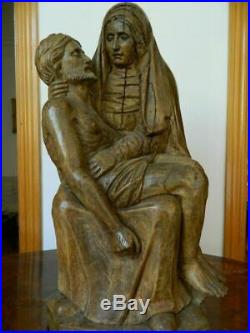 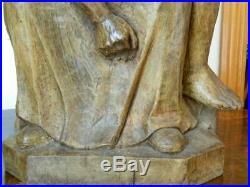 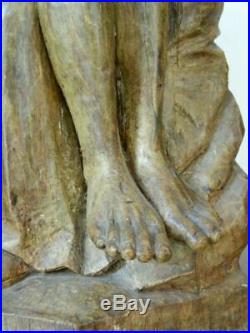 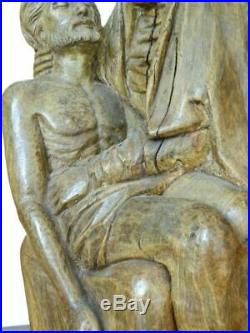 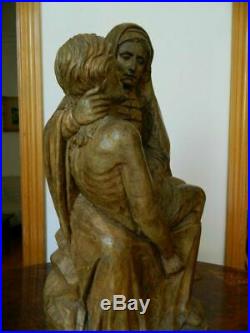 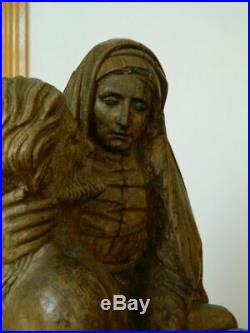 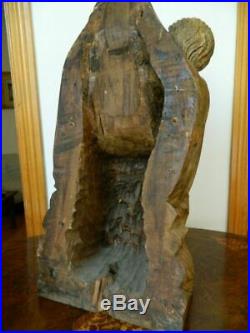 Late 15th Century carved wooden sculptures don’t get much better than this! Of large proportions, this fine carving depicts The Pieta. Flemish or South German origin. As a theme in Christian art, depiction of the Virgin Mary supporting the body of the dead Christ. Some representations of the Pietà include John the Apostle, Mary Magdalene, and sometimes other figures on either side of the Virgin, but the great majority show only Mary and her Son. The Pietà was widely represented in both painting and sculpture, being one of the most poignant visual expressions of popular concern with the emotional aspects of the lives of Christ and the Virgin. The theme, which has no literary source but grew out of the theme of the lamentation over Christs body, first appeared in the early 14th century in Germany. It soon spread to France and enjoyed great popularity in northern Europe in the 14th and 15th centuries. Although the Pietà remained mostly a Franco-German theme, its supreme representation is that completed by Michelangelo in 1499 and housed in St. Peters Basilica in Rome. Influenced by the northern style, Michelangelo draped the figure of Christ across Marys lap. Through this pyramidal design and the details of his figures, Michelangelo created a scene that displayed at once agony, solemnity, and heroic resignation. The format of the Virgin bearing the body of Christ on her knees was standard until the 16th century, when, influenced by the Renaissance concern with logic and proportions, artists usually depicted Christ lying at the Virgins feet, with only his head propped against her knees. This form was adopted by Italian Baroque art and was passed on to Spain, Flanders, and Holland. Most religious art suffered a decline after the 17th century, but, because of its special emotional appeal, the Pietà continued to be a vital theme through the 19th century. Traces of old polychromy. Surface wear commensurate with age. This figure displays very well. We are a member of LAPADA (London and Provincial Antique Dealers Association) and CINOA. LAPADA is the UKs largest trade association for professional art & antiques dealers (representing approximately 500 UK dealer members). CINOA is the world association of Art & Antique dealer associations (representing 5000 dealers from 32 associations in 22 countries). All items are backed by our LAPADA guarantee. These can be viewed at our shop based in Little Walsingham, Norfolk, NR22 6BN. The item “Large & Impressive Late 15th Century Antique Carved Wood Sculpture of The Pieta” is in sale since Saturday, October 26, 2019. This item is in the category “Antiques\Woodenware\Carved Figures/Models”. The seller is “holtantiquesltd” and is located in Walsingham. This item can be shipped to North, South, or Latin America, all countries in Europe, all countries in continental Asia, Australia.