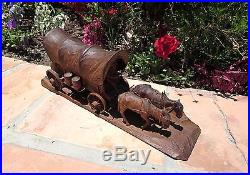 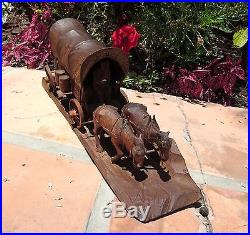 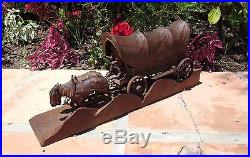 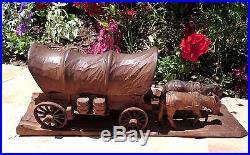 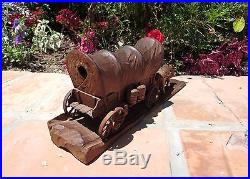 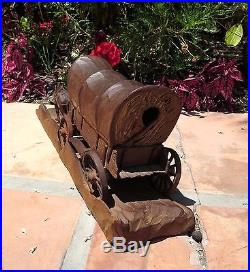 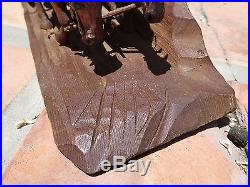 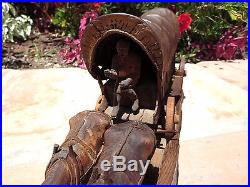 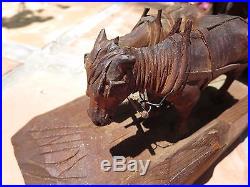 A pproximately 15 1/8″ long, 3.25″ deep and 5 5/8 at the highest points. Signed ANDY on the base. In overall good condition. The first recognized American caricature carver, H S Andy Anderson was born in 1893 in Chicago, Illinois. When he was a young teenager he moved with his family to Colorado and while growing up there, Andy carved horses, cowboys, and depictions of life. At the age of 16 he left home to work with a cowboy. Andy wrote in his book One day a cowboy rode in from Wyoming, who was the homeliest man I had ever laid eyes on. All the rest of that day I could see him in my mind and thought,’What a good character he would make for a wood carving! He was my first model, and this was my first attempt at carving a likeness of anyone. The figure of this old weather-beaten cowpoke turned out real good (much to my surprise) and from then on I started carving characters. In 1927 Andy moved to California to be near his parents. His figure carving began to evolve as he was creating characters from the Old West. He began carving full time and earned a respectable living through the 1930s. He eventually set-up a workshop at Southern Californias venerable Knotts Berry Farm, where he could always be found carving, surrounded by an enthusiastic crowd. During World War II most of the items he carved went to high-ranking officials in the Army and one was even given as a gift to President Franklin D. Roosevelt from Jesse Jones, Secretary of Commerce. While Andys carvings were somewhat less refined and more whimsical than todays caricatures, his enchanting figures were highly regarded and sought after by movie stars, politicians, and a broad range of collectors in addition to many museums. Any questions please feel free to call (323) 863-676 6. The item “H. S. Andy Anderson (1893-1963) COVERED WESTERN WAGON Woodcarving Sculpture” is in sale since Thursday, November 16, 2017. This item is in the category “Art\Art Sculptures”. The seller is “centiques” and is located in Beverly Hills, California. This item can be shipped to United States.