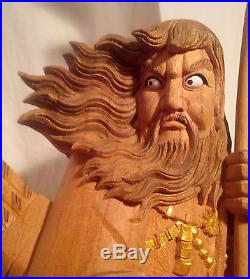 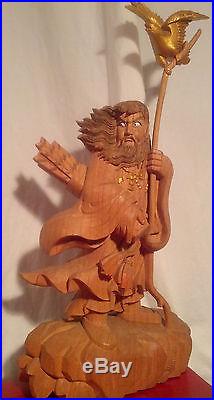 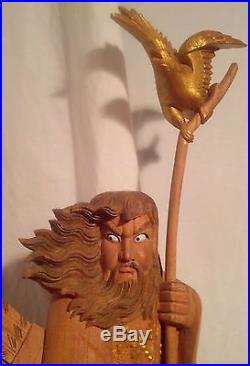 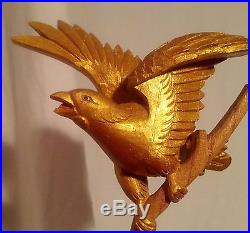 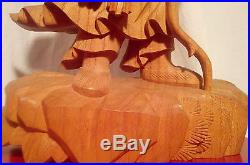 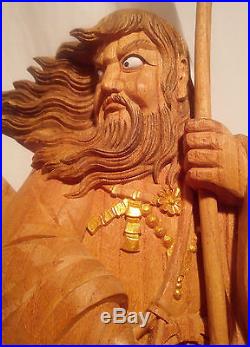 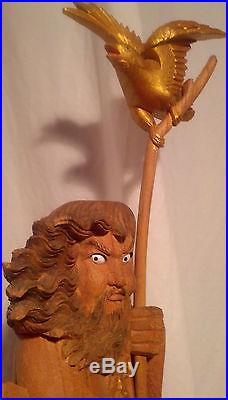 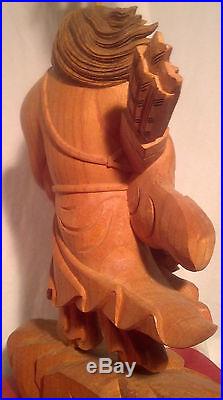 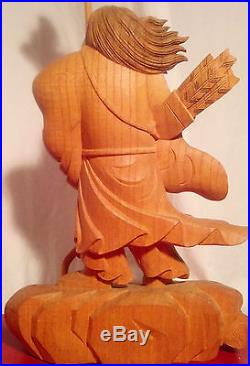 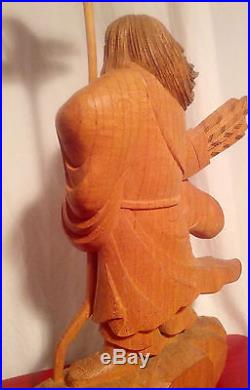 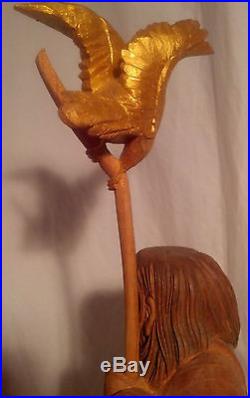 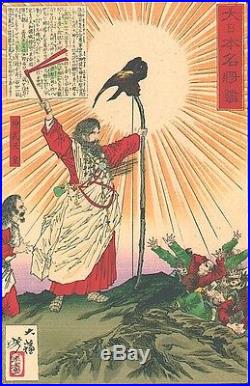 Made from Zelkova Serrata Wood: Keyaki in Japanese or. The wood is highly prized by Japanese woodworkers for its beautiful grain, and is used to fashion items as small as bowls to large pieces of furniture. Stunning ability to maintain bleed-lines of paint i. Whites of eyes, especially in this high-grain, light wood! Magical ability to capture realistic wind details. In the likeness of Emperor Jimmu was the first emperor of Japan, according to legend. The top half the of bird and rod easily pull up and out from his hands. The divide-line skillfully and thoughtfully hidden. 38 cm tall x 19 wide (14.9 inches x 7.5 inches). Piece most likely dates from the latter half of the 20th Century. Emperor Jimmu was a descendant of the sun goddess Amaterasu through her grandson Ninigi, as well as a descendant of the storm god Susanoo. He launched a military expedition from Hyuga near the Inland Sea, captured Yamato, and established this as his center of power. Mythic records in the Kojiki. Oldest extant chronicle in Japan. And Nihon Shoki describe, how Jimmu’s brothers were born in Takachiho, the southern part of Kysh (in modern day Miyazaki prefecture), and decided to move eastward, as they found the location inadequate for reigning over the entire country. Jimmu’s older brother, Itsuse no Mikoto, originally led the migration, and led the clan eastward through the Seto Inland Sea. As they reached Naniwa (modern day saka), they encountered another local chieftain, Nagasunehiko lit. “The long-legged man”, and Jimmu’s brother was killed in the ensuing battle. Jimmu realized that his brother been defeated because he battled eastward against the sun, so Jimmu decided to land on the east side of Kii Peninsula and to battle westward. Jimmu’s army reached Kumano with the guidance of his crow, Yatagarasu, they moved to Yamato. There, they once again battled Nagasunehiko and were victorious. In Japanese mythology, this flying creature is a raven or a Jungle Crow called Yatagarasu (, “eight-span crow”) and the appearance of the great bird is construed as evidence of the will of Heaven or divine intervention in human affairs. Yatagarasu, the Crow-God himself, is symbolic specifically of guidance. This great crow was sent from heaven as a guide for Emperor Jimmu on his initial journey from the region. Gilded in this example as a depiction of the bright, blinding sun, that Jimmu faced. According to the legendary account in the Kojik i, Emperor Jimmu was born on February 13, 711 BC (the first day of the first month of the Chinese calendar). Jimmu died when he was 126 years old. Many of my other Japanese treasures from my collection are up for sale including my mask collection! Check out my other items. The item “Zelkova Wood, Japanese Sculpture/Carved Figure of Emperor Jimmu Tenno” is in sale since Sunday, January 11, 2015. This item is in the category “Antiques\Asian Antiques\Japan\Statues”. The seller is “maskmonger” and is located in Freeport, Maine. This item can be shipped worldwide.